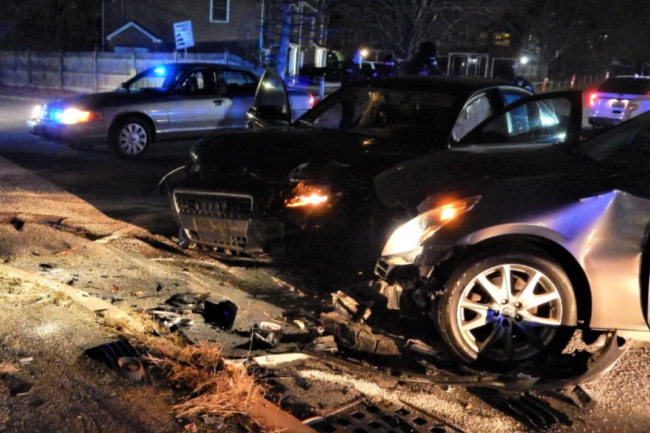 A Lowell man is facing a series of charges after he allegedly crashed a stolen car near the intersection of Lincoln and Washington streets on Saturday night. AARON CURTIS/LOWELL SUN

LOWELL — A Lowell man who police said was wanted on illegal firearm charges and several other warrants was captured after causing a two-car crash while attempting to flee from police on Saturday night.

The suspect, 28-year-old Luis Morales, was uninjured in the crash, while the operator of the other vehicle involved in the wreck — near the intersection of Angle and Lincoln streets — suffered minor injuries, said Lowell Police Capt. James Hodgdon.

The incident started around 8 p.m. when an officer from the Gang Unit noticed a black Audi sedan in the driveway of 19 Washington St. — known to police as Morales’ residence, Hodgdon said. A short time later the officer spotted the same Audi on Washington Street and activated his lights in an attempt to stop the vehicle.