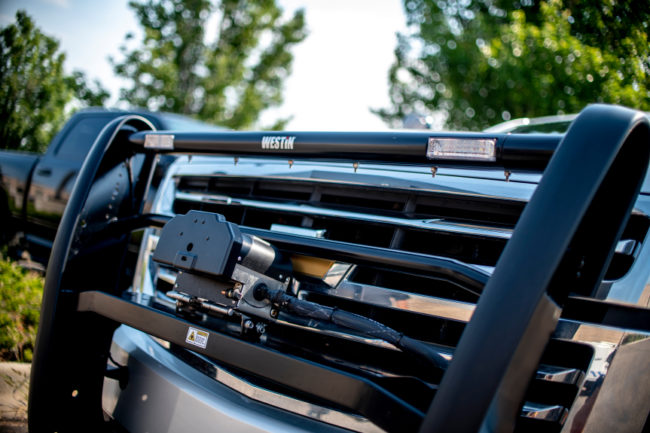 GREELEY, CO – AUGUST 11:The launcher is seen mounted to the front of a patrol vehicle during a demonstration of the vehicle tracker technology used by Greeley police in the parking lot at the Greeley Police Department in Greeley Aug. 11, 2020. The system, made by a company called StarChase, fires an adhesive dart at a target vehicle that transmits speed and location via satellite to tracking software accessible by the department. (Alex McIntyre/Staff Photographer)

When drivers speed away from police, they put not only themselves and police in danger, but innocent drivers, too.

From 2014 to 2018, police chases across the U.S. resulted in 1,699 fatal crashes, killing at least 2,005 people, according to an analysis by the Fine Law Firm and 1Point21 Interactive. Of those fatalities, 1,123 were not the driver who was fleeing police.

“There’s so much going on at that moment when a person decides to run from the cops,” Greeley Police Cmdr. Aaron Carmichael said. “If this person is running from us for a very minor crime, it does not justify us seeing that person run into a family in a minivan down the road.”

To prevent such tragedies, police in some cases discontinue the pursuit altogether, if it would be more dangerous to pursue the suspect through traffic than to locate the suspect later. In such cases, police may have captured license plates and suspect descriptions, to help them find the suspect. Since early 2019, Greeley police have had another means of finding suspects after discontinuing the pursuit: GPS tracking devices that can be launched and stuck to the suspect vehicle.

Carmichael, who oversees special operations at the department, said the department acquired the tracking systems as part of Chief Mark Jones’ focus on how police can do their jobs in a way that’s safer for the public while also increasing efficiency. Jones was appointed chief in June 2018.

Since acquiring the tracking systems, called StarChase, police have had “pretty amazing results” with them, Carmichael said. He said Greeley police have successfully deployed the devices in at least 15 cases. According to StarChase’s website, the devices have been deployed more than 10,000 times globally and resulted in more than $150 million recovered assets. The company also says cases involving successful deployment have an 85% apprehension rate.

The trackers, which are a little bigger than 12-ounce cans, are stored in a double-barrel launcher attached to the front bumper of patrol vehicles. Inside, the officer has a control panel in the center console. Though there is a targeting system, Carmichael said the department trains officers only to position their vehicles properly for the trackers to stick.

“It takes a fair amount of maneuvering. It takes significant training,” he said.

Once an officer launches the tracker — which can be done using either the control panel or a remote button — a strong adhesive on a spongy end of the device attaches to the back of the suspect vehicle. Carmichael granted that the trackers don’t always stick where they’re supposed to. Sometimes they can come out wobbly and miss the intended target. Even then, the adhesive can be powerful.

“It’s landed on top of the car, or it bounced up underneath and stuck or into a wheel well,” Carmichael said. “It’s pretty amazing how well that device works, and how once you get it launched, it does everything it can to stick to the target.”

After the tracker has been successfully deployed, police can back off the suspect and watch where the suspect goes. StarChase has an online system officers can access in their vehicles, on their phones and even at the department. The system shows the location of each tracker, which is updated every 60 seconds. Data tracked includes the speed and direction of travel, as well as a notification if the vehicle has been stopped for a while.

The system has the added benefit of allowing different agencies to share the tracking data. This comes in handy when the suspect drives off into another jurisdiction. If the other agency doesn’t have the software, Carmichael said the department can provide them with the location information themselves.

Once a suspect has stopped, police can plan the safest arrest possible.

The trackers last for hours. Carmichael said police once tracked a suspect for five hours as he drove around the city. They were eventually able to disable his car and take him into custody after tracking his location.

In late July, an officer deployed a tracker after he attempted to pull over a vehicle with expired plates and the driver proceeded to flee the scene. Police tracked 23-year-old Yolanda Ramirez as she hit speeds of up to 65 mph before coming to a stop in the 400 block of 37th Avenue Court, according to an affidavit for her arrest.

Police arrived shortly after, less than 10 minutes since the attempted stop, and contacted Ramirez as she was walking away from the vehicle with two others. Ramirez was identified as the driver and arrested on suspicion of vehicular eluding and other traffic charges. She has a disposition hearing 2 p.m. Aug. 28.

About a third of Greeley’s patrol officers, who make the majority of traffic stops in the department, have the tracking system on their vehicles.